Picture credit: Boardroom battles….. The Apprentice. Photograph: BBC/PA Photo, from the review in The Guardian.

December 2013 update: Martin Wolf has chosen The War of the Sexes as one of his books of the year in the Financial Times:

“With characteristic brilliance, Seabright uses biology, sociology, anthropology and economics to explain the war of the sexes. Men and women must co-operate to bring their offspring to maturity and conflict is inherent. Yet today opportunities for more successful and equal relations between the sexes are greater than ever before.”

In chronological order of appearance:

A favorable but somewhat surrealistically inaccurate review by Roger Lewis in the Daily Mail.

Jonathan Rée in The Guardian

Fran Hawthorne in The New York Journal of Books

Alexander Delaigue in Liberation (in French)

Anna Cristina Pertierra in Inside Story

Some reactions in the blogosphere:

BBC Nightwaves, the interview runs from the 23 minutes point and lasts 11 minutes

The Moncrieff Show on Newstalk Radio Ireland, section 4, around 9 minutes in

The podcast is here: the slides are here.

Diane Coyle covered the lecture on her blog here, and the Guardian referred to it in an editorial.

I wrote this op-ed piece for the Guardian on the same theme on 21st May 2012. 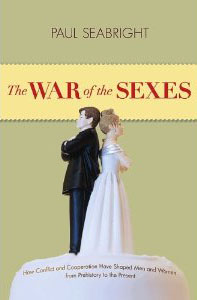 Paul Seabright, The War of the Sexes: How Conflict and Cooperation have Shaped Men and Women Prehistory to the Present, Princeton University Press, published May 2012 (eBook April 2012)